Programming is the next generation literacy. It is something that everyone should endeavor to at least understand a bit. Just as reading and writing act as one of the backbones of civilization and scholarship, even so are programming and coding in this century and beyond. 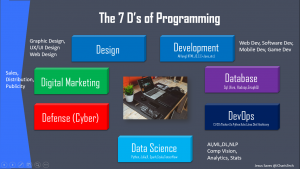 Database: Databases are essential to the world of programming – without which we will not be able to store and manage the data generated in the world. This domain is very important as it serves as the fundamental building blocks for several other fields of programming. It involves database administration,database architecture and engineering.  Popular languages and tools used in this field include SQL,MySQL,GraphQL,Hadoop,Hive and many more.

DevOps : The next D’ of programming is DevOps. This consist of two fields – Developers and Operators. So after developing your tools,programs and softwares, you will need operators to deploy and monitor them. This is where devops comes inside. It deals with CI/CD , System Administration,Back-End dev and more. We have several forms of Devops engineers such as Cloud DevOps,Edge DevOps,etc. The most popular tools and languages used in this field are Docker,Chef,Jenkins,Git as well as most of HashiCorp tools. Languages such as Go,Python,Java.Bash are very useful to know as a devops engineer. It is also well paid.

Data Science : The next D of programming is the Data Science domain of programming.This is the most hyped nowadays due to the numerous potential it has to offer. Basically,data science is the science about the data we have generated. It is about how to derive useful insight from the data available to influence decisions and make predictions and prescription. There are various sub domains within this field of which include Artificial Intelligence,Machine Learning,Deep Learning,Computer Vision,NLP and more. It also has to do with statistics and business analytics. In a nutshell we can have descriptive data analytics,predictive analytics and finally prescriptive analytics. Descriptive analytics has to do with understanding the data at hand. Whiles Predictive analytics deals with deriving insight from the data to use in making predictions and forecasting. After we have been able to make predictions, we move on to the next step – Prescriptive analytics- that is how are we going to use the knowledge of the predictions to influence our decision and prescribe the best solution. This is a very large domain that has tons of opportunities and needs more people. The pay is also great for now. Popular languages used in DataScience includes Python,R,Java, Julia,Scala,Octave(Matlab) and more. To begin with this field you can check out this post for some interesting books to get started.

Defense(Cyber): It is not enough to  make products and have databases, you need to also defend and secure our systems and products. This is where defense comes in. It includes cyber defense,information security (infosec), penetration testing and offensive security. This is the domain of the infosec, pentesters and hackers. A very promising and vital field in programming. It has a lot of opportunities and will be in high demand  more than it is now. The popular languages and tools used in this field includes C,Python,Ruby,Bash,Powershell ,Metasploit,Setoolkit as well as OS such as Kali,Parrot OS. A quick mention is that we can also include digital forensics as part of this field although it can have it own field to make it the 8 D of programming -Digital Forensics.

Digital Marketing: The final D of programming which is mostly forgotten is the field of digital marketing. This is where we distribute our tools and our product. That is after you have made your products and services you will need to market it so that you can get client,users and make some sales.

It involves sales and marketing as well as teaching others  via tutorials ,courses and documentation. It is a very essential and vital field that every programmer and developer must venture into. It is what brings in the most profit as well as the most influence to impact thousands of people. This is publicity. Unfortunately most programmers and engineers leave this field to the business and marketing team. It is where you are able to translate your code to cash faster. Digital marketing has a lot of opportunities.

These are the 7 D’s of programming. Another D we can also talk about which I already included in the Defense Domain of programming is Digital Forensics. The field of computer forensics,mobile forensics and the like is also promising and full of opportunities.

Programming is the next generation literacy,remember don’t just code but also create. Thanks for your time.

Check Out the Video Discussion here